While it may be a myth that we use only 10% of our brains, it is an absolute that few come close to realizing all they can be.  This is because most people remain unaware of the nature, variety and extent of “what lies within”.

Kurt Goldstein, a German neurologist/psychiatrist first introduced the concept of self-actualization in 1934, in his book: The Organism: A Holistic Approach to Biology Derived From Pathological Data in Man. As its title might suggest, this was not a best-seller of its time — in fact, this seminal concept didn’t really take hold in medical and intellectual circles until decades later.

Dr. Goldstein described the concept as a “driving force” which resided within human beings and motivated a person to develop their God-given abilities to the fullest extent, which in turn would guide them in the determination of their life’s “path”.

In 1943, Abraham Maslow, a Brooklyn-born Psychology Professor at Brandeis University published a banal titled article:  A Theory of Human Motivation.  In it, he redefined self-actualization as a “desire” to be “more and more of what one is”, rather than a “driving force” to maximize all one is capable of.  This refinement suggested a person may want to be all they can be; however, there are other more fundamental human needs that take precedence, which if not met, can effectively eliminate the possibility of self-actualization altogether in a person’s life — and there is no shortage of people who go through life oblivious of what they are truly capable of achieving.

Environmental factors which impede self-actualization include poverty, inadequate education, drug abuse, crime, corruption, political instability, famine, disease, natural and man-made disasters, unplanned pregnancies, domestic abuse, broken families, physical and mental illness and all forms of oppression.  In such situations, the notion of self-actualization being a “driving force” is clearly overstated. This is because when faced with such challenges, the notion of self-actualization is usually the furtherest thing from one’s mind — for one’s focus becomes merely trying to survive.

This is not to say all who face significant challenges are held back from reaching their potential. For instance, Abraham Lincoln lacked a formal education, and Oprah Winfrey was born into life of poverty and abuse — but they are the overwhelming exceptions, because they possessed an unusually strong desire to succeed, along with prodigious inherent skills and abilities.

Nevertheless, even under the best of conditions, Dr. Maslow believed self-actualization rarely occurred — in fact, he surmised less than 1% of the adult population ever reached their full potential.  But there are plenty of people who get “close enough”.

Without getting into a debate on “how close is close enough” in the development of one’s full potential, it really doesn’t matter — for those who . . .

. . . are able to cultivate significant improvements in their lives that they themselves find surprising, and which manifest enrichment and lasting happiness.  And this results from their quest for self-actualization, NOT from actually attaining it.

And those daring enough to give it a shot, invariably end up bringing those they love along with them for a captivating ride of a lifetime, which then tends to perpetuate it. Accordingly, it would be more accurate to describe self-actualization as a theoretical concept that when put into practice, can lead to a journey of wondrous delight, instead of a final destination of anticipated nirvana.

The Journey Lies Ahead

While seeking self-actualization may be an individual undertaking, differing widely from one person to another, there are certain traits commonly observed or otherwise expected from those who are “self-actualized” in that they tend to be:

Accepting — Since they have come to accept their own shortcomings, they are similarly accepting of the shortcomings of others, and as a result they generally lack prejudice.

Altruistic — They can be unselfish to a fault, often focusing on resolving the problems of others in BEFORE attending to their own pressing needs.

Humored Easily— They have a well-developed sense of humor, as well as an uncanny ability to maintain perspective, often diffusing stressful situations with timely levity.

Independent — As they are highly focused in their pursuits, they can be fiercely independent, and often operate autonomously.

Introspective — They follow a regimen of critical introspection, especially after set-backs, enabling them to grow from such experiences, rather than be scarred by them.

Resolute — They tend to resist outside pressures, thereby enabling progress in their pursuits to continue unabated.

Selective — Fewer friendships are formed; however, theirs are of substance, deeply resilient, steadfastly loyal, and as a result . . . long lasting.

Spontaneous — They are enormously creative and therefore able to swiftly adapt to change with almost effortless spontaneity.

Transcendent — Rather than “put up” with something they know to be wrong, they undertake meaningful action to ameliorate it in large scale, so as to help many others.

Which of These Qualities Do You Possess? Don’t be discouraged if few or none of them seem to describe you — for those who embark on the road to self-actualization and stick with it, not only end up changing their lives for the better, but undergo a metamorphosis themselves, eventually finding they have merely brought these once hidden traits to the forefront.

In addition to refining Dr. Goldstein’s concept of self-actualization (discussed above), Dr. Maslow introduced a framework of fundamental human needs (e.g., physiological, safety, social and esteem), that he described as prerequisites.  He contended if there was an ongoing deficiency in meeting any of these needs, the quest for self-actualization would surely be futile.

Over the decade following his first article on the subject, Dr. Maslow conducted extensive empirical research studying  “the healthiest 1% of the college population”, as well as the lives of “exemplary people” such as Albert Einstein and Frederick Douglass.  He memorialized his findings in 1954, with the publishing of his book, Motivation and Personality.

Dr. Maslow called this framework a Hierarchy of  Needs, portraying it as a pyramid with the largest and most fundamental human needs at the bottom and the need for self-actualization at the top — this is covered in the next section. 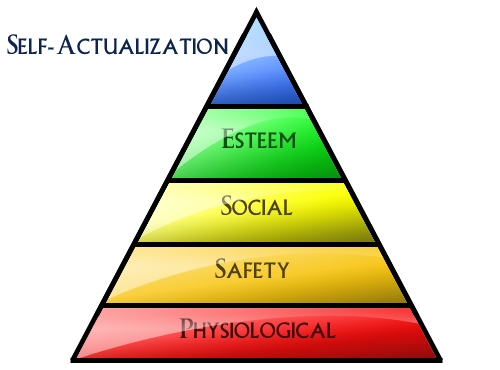 58 Responses to What is Self-Actualization?