For most readers of this blog, the Fall (or Autumnal) Equinox occurs when the orbit, rotation and pitch of the planet earth moves the midpoint of the high noon sun below the earth’s equator from the Northern hemisphere to the Southern hemisphere.

The context of this post reflects Northern hemisphere perspective.

Although summer officially ends with the Fall Equinox on September 22, 2014, most consider the last day of summer to be Labor day — and thus representing the “unofficial end of summer“.  At this time of the year many may feel compelled to shift out of the “relaxation mode” mindset that summertime had blissfully placed them in, and this may naturally cause a “downshift” to one’s morale.

Accordingly, some may feel it is once again time to get serious about their life — particularly in their vocational endeavors, whatever they may be.  This may also bring about a feeling of remorse or sadness.  And this post serves to remind those  experiencing such “post-summer blues” to . . .

Importantly, this post is intended to be relevant year-round, in that it is especially dedicated to those who have experienced a loss, where the associated emotional pain of a broken heart may be especially piercing, and in instances where this omnipresent foreign aching simply won’t go away.

And since you may have never experienced anything quite like this before, you may frankly not know how to lighten your heavy heart.  This dark feeling may have been brought on by the painful end to a long beautiful and enriching relationship, the untimely loss of a loved one, or perhaps the result of unfortunate and emotionally debilitating events that seem to have drained you of your energy, and will to go on.

This is all the more reason to summon the courage to . . .

The Art of Smiling by Charlie Chaplin . . . 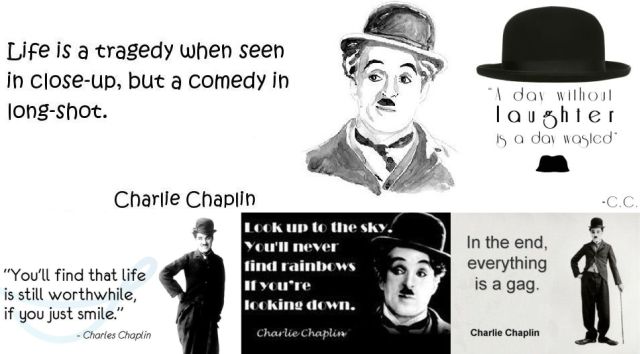 Perhaps the world’s foremost expert EVER in the “art of smiling” was Sir Charles Spencer (“Charlie”) Chaplin, as it was something he personally embraced, consciously engaged in, espoused to many and manifested for countless others who enjoyed (and will continue to enjoy) his vast array of performances in  cinematic productions that spanned FIVE decades.

His now classic silent films began  in 1914, and successfully proceeded well into the period of full sound movies through the late 1930’s and continued on in his own full sound movies, up to and including his last film in 1967, A Countess from Hong Kong (starring Sophia Loren and Marlon Brando), which he wrote, scored, directed and produced.

Notably, Charlie Chaplin’s first talking film was The Great Dictator, which received high critical acclaim and became his most commercially successful film.  Its unmistakable message was especially prescient and boldly controversial in its condemnation of the fascism, which were movements that were beginning to take hold in Europe under Adolf Hitler in Germany and Benito Mussolini in Italy.

This particular clip from the film is especially moving and is perhaps MORE applicable today than it was in 1940 . . . you be the judge.

Although Charlie Chaplain left us in 1977, he has imparted many priceless eternal gifts that will be enjoyed and savored for generations to come.  These include: (1) his inimitable comedic charm in his movies that have consistently brought smiles to  millions; (2) his aphoristic pearls of wisdom on the subject of smiling (some of which grace the images of this blog posting); and (3) the classic song “Smile” which he wrote, and has since been recorded by many outstanding artists (e.g., Michael Jackson, Josh Groban); however,  in the opinion of this blog’s author, no rendition of this song comes close to the masterpiece performance by Nat King Cole, which is presented in the touching music video below (featuring Charlie Chaplin and then wife, actress Paulette Goddard), along with its simply beautiful, but evocatively powerful lyrics.

Smile though your heart is aching
Smile even though it’s breaking
When there are clouds in the sky, you’ll get by
If you smile through your fear and sorrow
Smile and maybe tomorrow
You’ll see the sun come shining through for you

Light up your face with gladness
Hide every trace of sadness
Although a tear may be ever so near
That’s the time you must keep on trying
Smile, what’s the use of crying?
You’ll find that life is still worthwhile
If you just smile

That’s the time you must keep on trying
Smile, what’s the use of crying?
You’ll find that life is still worthwhile
If you just smile